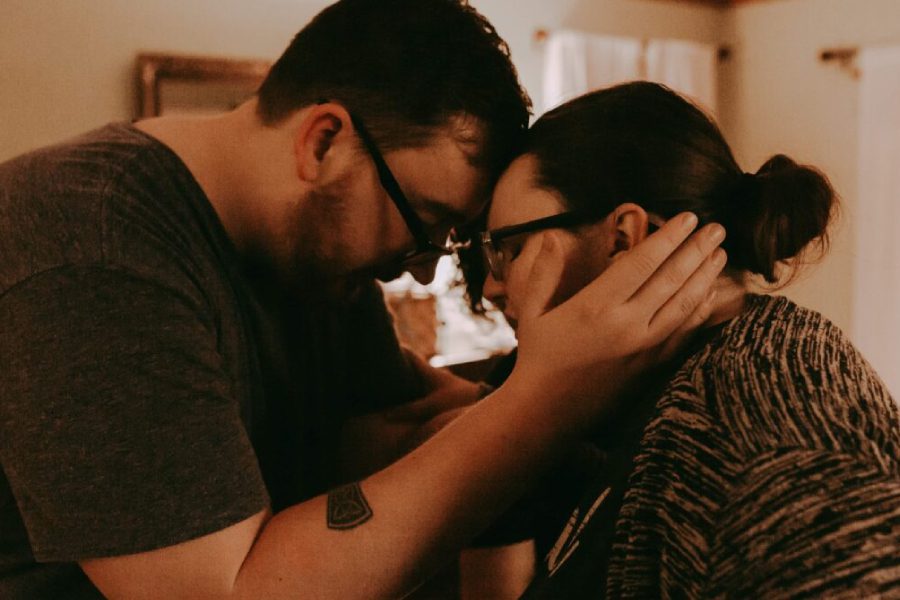 As a doula in Lawton Oklahoma, I had met with Cari before the birth center was a thought and she had told me one of her dreams was to open a birth center. I would like to say I was fairly “in the know” hearing rumors and whispers about a birth center opening up through the birth worker channels. Once the birth center was ready to go and set to open, they hosted a doula night for us to come and see the center before the official opening. As soon as I walked through the doors, my heart stopped and I shed a couple tears. I told my doula friend,Tiffany, that was with me, that I could definitely imagine having my next baby there!

With my first, I had planned a home-birth but had to be induced in the hospital due to some late pregnancy medical issues. The loss of my “dream birth” took a huge toll on my mental health and I struggled deeply with Post Partum Depression because of it. I was so worried that I would put all my energy and dreams into a birth center birth and then not have it come to fruition again.

I definitely over analyzed everything towards the end of my pregnancy and had this weird doula brain/ pregnancy brain inner struggle where I would try to Doula myself and try to calm my stressing. Lenora was just as wonderful entertaining all my nickpicking and putting my worries at ease.

My husband was very supportive though he was just as worried about maybe having to go to the hospital again but he kept reassuring me trust my body. My extended family was a little concerned but I had my mom come down to meet Lenora at one of my prenatal appointments and that definitely made her feel better. I could tell she was more on board when she started taking a million pictures of the center before we left! My mother-in-law was a little bummed that we were traveling an hour away because she wouldn’t be able to be at the birth as she still works but I think it was cool that she came right to our house on her lunch break to meet the baby!

I had prodromal labor for a couple weeks before my due date. I had my membranes swept at my 40 week appointment and the contractions started the next day. They were very easy to manage and were spaced fairly far apart so I kept telling everyone that either this will pick up to active labor if I am in early labor or die down and just be prodromal. With every position change, I would say please don’t go away to my contractions because I was ready to get this baby out! Once night time came, I laid down to rest, and they picked up fairly quickly after that. I then knew it was the real deal!

My contractions were fairly close together, 3/4 minutes apart, lasting long, and I was pretty vocal through them. They were much more intense. I called Lenora to give her an update and I had several contractions while on the phone and she thought it would be a good idea to come in based on the way I sounded!

Once I got to the center, we headed up stairs and I did opt to be checked. I was 5cm 80% effaced. I was honestly a little discouraged because I was having some crazy back labor and I wasn’t sure how much longer I could handle it being only half way there. However, I turned on my music and swayed with my husband. I tried to remain as relaxed as possible and kept my noises low and focused on my breathing. Anytime I tried to change positions, my body was like nope, so I stood the entire time clinging to my husband. Gravity is amazing yall. Maybe an hour/ an hour and a half later I remember looking at my doula and saying I think I feel pushy. I definitely doubted the feeling because I hadn’t been there for very long and surely it wasn’t time yet. Right on cue, Lenora came out to see how I was doing and I told her that I felt pushy. She smiled and said that I sounded pushy and to trust my body. With the next contraction I started bearing down and it definitely felt right at to do that. While pushing standing up, my water broke. Since I had been standing the entire I really did not feel like I had enough strength left in my legs to push the baby out in that position so I transfered to the bed in an awkward side lay. I pushed for a little bit there but baby’s heartrate said that he didn’t like that so I flipped over to my hands and knees and used the CUB to brace myself. I felt baby fairly low and kept asking if they could see a head. Wendy would say not yet and then I would think some not so nice words. I pushed again and there he was! Kinda surprised everyone and he came out quickly!

Honestly, just the fact that I got to be at the birth center and say that I DID IT. My body went into labor on its own. It dilated on its own. It pushed on its own. So different from my first birth and what I had originally wanted. I finally got what I had planned for. For all those years of PPD/PTSD from my first birth finally coming full circle into this birth, it was a beautiful experience. After losing 2 babies prior to this birth, being able to pick up my baby boy and know that I got to give him the most peaceful entrance into this world after I prayed so fervently for him still brings a tear to my eye. Being a doula, I got to see many moments like this and I was so thankful I got to have my own!

I think pushing was the most challenging part only because it was not what I was expecting. Most women during this phase, their pain can shift into being more focused/not as intense. For me, it was definitely the most intense stage and I was surprised at how rectally pinpointed it was! I knew that there would be rectal pressure because everything is connected but I don’t know how many times I told everyone in the room that I felt like the baby was trying to come out of the wrong hole!

I was a little indifferent about it. I felt like it went by fairly quickly and would have liked a few more hours to rest. I felt like a lot of things were happening for me. I am thinking of ways for the next one to be more mindful of my time after the birth to allow for more rest.

Yes, she did! Any time that I get to see Lenora is a great day! I loved just being able to see her again and not have to go out of the house but for her to come to me and check on things was nice!

We planned with our first to do a cord burning ceremony but did not get to do it in the hospital so we made a point to do it at this birth. However, we were not expecting how long it would take so we sat there for like 15 minutes burning the cord while everyone just looked on in anticipation. Eventually, boredom kicked in and I eventually got so fed up I was like, “Just cut the dang thing” so we have pics of both events happening to the umbilical cord!! I am so thankful to the whole birth team that was with me, I definitely consider them family and am always so happy when I get to work with them!