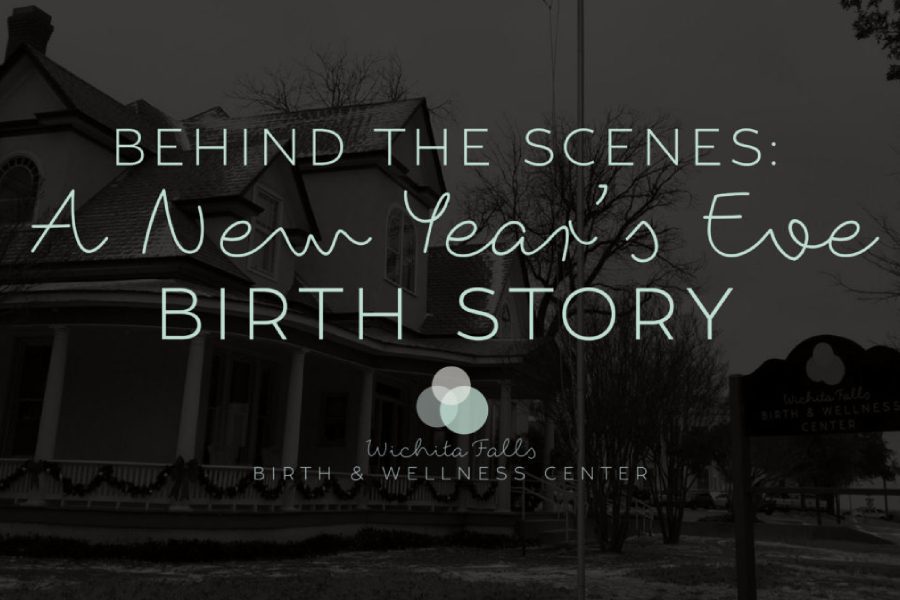 We know that you love to read birth stories and people love watching shows like Call the Midwife in which you get to see birth stories unfold from the staff’s point of view, so we thought we’d share with you an exciting birth story from our point of view today!

We had a client with a late December due date who hired me as her doula.  My sister in law Shelby Jones, who is also a doula, was her photographer. Jaycie Wright, our new Birth Assistant was training alongside Birth Assistant Molly Cardwell. This sweet client, we’ll call Anne, was pregnant with her fourth child and her previous births had been quite short. All of us spent the last few weeks being ready to join her at the drop of a hat.

On Dec 29, a Friday, Anne had mild contractions that were only 2-3 minutes apart. Since her  last birth was about an hour long, we all jumped in our cars and raced to the birth center. However, they decreased in intensity while we were en route so Lenora sent her to the mall to walk. The team gathered around a space heater in Lenora’s office. The weather was cold for Texas, in the 30s and 40s, and the downstairs heater wasn’t cooperating.

The next day would bring a cold front and possible precipitation. I drive from the Sunset/Bowie area along with Shelby and Molly drives in from Vernon, so we made plans for “what if” the roads were bad. My family was dealing with what we named the “Crying Flu”-some virus that gave three of my girls such a headache, fever and chest congestion that all they wanted to do is cry. Molly wisely asked “what if” I get the flu and can’t doula Anne? Back to planning plans A, B, and C….

Anne and her husband came back in and since she could easily talk through her contractions, she decided to go home. We all bundled up and headed to our cars, knowing we’d see each other soon.

The next day, all was quiet from Anne. The cold wind was blowing and we were all hoping the weather would be fine and/or Anne’s baby would wait. I was so cold and my eleven year old was in “daddy’s spot” since he was working an overnight shift. I shivered so hard I wondered if I was about to have the Crying Flu. Then my phone went off. Anne texted that she was having painful contractions. Since we were under a travel advisory, I waited for Lenora to check Anne before getting out from under the blankets. I hoped my daughter wouldn’t wake up-she hates for me to leave and would not be happy about this. My clothes, doula bag and shoes were all ready. I knew it would only take me a few minutes…but oh the chill that was coming when I got out of bed! I closed my eyes, pulled the blankets over my shoulders and prayed that labor would fizzle again (sorry Anne!).

Lenora calls me. “She’s about 7cm and I think we’ll have a baby tonight.” She’d been about 5cm before labor started. I told her I’d get on the road and depending on conditions be there in about 1.5 hours. It didn’t take that long, but Shelby and I arrived last, at 12:20 am. It’s now New Year’s Eve. Everyone had to wait for their windshields to thaw but the roads were not very icy yet-just a building layer of ice starting to form on bridges and overpasses.

The team has given Anne and her husband space to settle in. There’s a nifty midwife workroom with a futon adjacent to one of the birth suites. They settled in there and told me to “do my doula thing and call them when we needed them.” Shelby and I join Anne and her husband in the Martha room where they’re chatting and welcoming the now spaced out contractions. Lenora had encouraged nipple stimulation so I remind Anne that it’ll help. Within a few contractions, the natural oxytocin was rising and contractions were getting stronger and closer together. An hour later, she’s serious enough for me to call Lenora in. Jaycie had already joined us so she can learn some comfort techniques, so now the entire team was by Anne’s side. She had an intense three hours of labor in which she needed the encouragement from each one of her team members. Anne’s husband took the brunt of Anne’s (now hilarious) labor-anger and stayed right by her side. Lenora was the foundational, chipper (but not too chipper) pep talker, I was the firm voice of reason, Molly was the motherly nurturer and Jaycie was the hopping right hand to Lenora. Shelby captured it all.

Baby was born in the wee hours before the sun came up. Snow was falling as we left the couple alone to bond (we were just a few feet away and checked on them often). TxDOT was warning people not to travel. Facebook included angry posts telling people to just stay home (ummmm well…babies don’t have Facebook, I guess).

The downstairs heater was still not cooperating so trips to the utility room for laundry were quick. Molly came up the stairs shivering and sternly warned not to use the downstairs restroom less you want a frostbitten backside. We grabbed another space heater for the little office, wrapped in blankets and scrounged for some food (dinner? breakfast?). It was about 5:30am.

We debriefed, took votes on who routinely wears underwear and laughed at each other’s modesty and comfort levels where undies are worn, or not worn, as the case may be. Jaycie grabbed a bottle of sparkling cider, poured some up in a plastic cup and toasted the new year.

After Anne was settled in and Shelby and I would have gone home, we settled into the empty birth suite for some sleep, hoping the roads would be clear later-even though reports were that they’d be worse. We didn’t want to drive in the dark, so even if they were bad, we’d rather see what we were skidding into. Jaycie, Molly and Lenora carried on with their work. I don’t usually sleep well with people moving around but after an all nighter, it’s not too hard. And these are my people. My team. We’d just done great work together then watched the snow fall from our vantage point on the second floor together, like little kids, excited at the first snow of the season, brief as it was.

Cari braved the roads and brought us breakfast and coffee. Manna, really. The family loaded up their newest arrival into their car and rejoined their other kiddos at home. Shelby and I tried to help clean up but the team knows the drill and does it well. We gathered up all our bags, coats, and supplies and gingerly walked to our cars. Mandates to text when we all arrive safely home followed as usual. I glanced up at the pink flag flying in the snow with a full and happy heart.