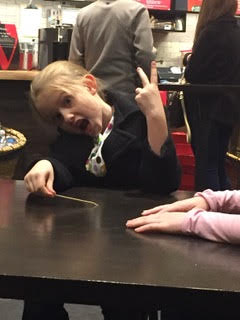 It was 2008 and Shane and I had four girls, he’d just started a new career (which meant debt from when he was in school). We had land in the country we wanted to build on so we could move out of town. We felt like our family was complete. But to make sure, we decided to pray about it for three months before we’d make a permanent decision with a vasectomy.

Then my period was late.

I was distraught. Oh how I cried and racked my brain for a way to go back in time. I am the most pro-life person you know but if I could just go back a few weeks and have a headache the night she was conceived, it would all just go away. Not because another baby would not be wanted, but because of what people would think. Being a semi-stay at home mom didn’t pay much. A “career” in county law enforcement didn’t pay much better. We walked in faith that God would provide as I chose being home over using my degree (okay so I was working in a professional job but it was part time and I prefer to pretend I was a stay at home mom). Adding a fifth baby to that strain would certainly have people talking. Besides a family with three children is “big” but not abnormal. Four children in a family is pushing it. Five is absolutely crazy.

I was  surprised and elated to hear excitement from our parents and friends when we shared the news. Our small group from church was super supportive. So we settled into the idea of adding one more baby to our family. Maybe it would be a boy this time!

It was not a boy. Again I cried. I love, love, love having all girls but I’d heard so often about the bond a mother has with her son and I just wanted to experience it for myself. Alas, it was not meant to be. At least I got to pick the name-Audrey Shayne-since I was outvoted with Jaika’s name.

I was planning another VBAC and on November 5th, I started contracting early in the wee hours of the morning. I got out of bed and washed dishes around 4am. Contractions kept me from sleeping but were irregular so I tried nipple stimulation. This brought some painful contractions but according to my journal, they weren’t terribly painful because I cooked sausage and egg burritos. My friend you’ve “met” in previous birth stories, Andrea, was working in L&D so I called her asking advice on when to come in.

We started making arrangements for the girls and Andrea called around 9:30 to say they were getting busy so I should meander in soon, then my doctor could break my water at lunch. Remember I was not in the birth world at all at this point so I didn’t know a whole lot (just that I wanted a VBAC).

I was getting pretty uncomfortable as we drove the 30 miles to the hospital. For any of you who drive to Dallas through Decatur, you know there are a couple of bridges on US287 in the middle of Decatur. I had a rough contraction while driving over one and just thought, “I do not want to do this again.” Jaika and Audrey were 28 months apart-closer than any of my other children. I felt like I’d just done this natural birth thing recently.

I was 6-7cm upon arrival around 10:30am. I debated getting an epidural. Wendy, my nurse (yes, I was blessed to have her again), said, “Well you’ve never had one, so why not try it this time?” So I did. Why not? What a great way to make a decision.

The anesthesiologist and students left the room and I tried more nipple stim. The monitor finally showed some action but it also showed Audrey’s heart rate was dropping at the end of the contractions and not coming up very fast. My records (it’s always fun to read your records if you’re a birth nerd-I highly recommend you get a copy) said I was having late and variable decels due to a rapid descent and that they improved some with position change and oxygen. Then I had a long, persistent deceleration into the 70s that returned well to baseline. That is when it was called for me to have a C-section. She was born 20-30 minutes after that.

My labor and delivery nurse friend, our pediatrician friend and our OB friend-all women-stood at my bedside and watched the monitor. Somewhere in that timeframe, my OB felt internally to see if my scar was opening up (not something I’ve ever seen or heard of while the baby was still inside-it’s pretty invasive). I assume it was not but we still had a C-section.

Audrey was born at 12:42pm with a true knot in her cord, just like Jaika. My journal said it was loose, my records don’t say anything except that it was present. I was able to recover in L&D in this new hospital, as opposed to taking a ride all the way through the public hallways to the ICU like I had to in Bethany’s birth). Audrey was brought to me and placed skin to skin. Recovery at the hospital was just fine, we had a lot of guests (too many, once again, but I didn’t know better).

We went home on a Friday. I weighed only one pound less than my final weigh in at delivery and I felt huge. Monday night I felt a congestive rattle in my chest. When I would lie down, I couldn’t breathe. Tuesday morning, after being up and around it improved but came back in the middle of the night. I woke up startled-unable to breathe. I moved to the couch so I could sleep upright and breathe. I was so afraid. I thought I was dying and asked God to let me live. And this is so me-I didn’t want to be wrong and go to the ER for the flu so I didn’t call yet.

First thing in the morning, one week exactly after Audrey’s birth, I called my OB’s office and reported shortness of breath. The receptionist didn’t know any better and told me she’d talk to the nurse but that they didn’t have any openings that day. After talking to the nurse, she said, “Get here now.”

In her office my BP was substantially high and she said she’d be sending me to the hospital next door for a CT scan, chest X-ray, an EKG and a ECG. There was contrast dye in the CT scan so I had to pump and dump (probably not really but it was a compromise). Audrey was passed off to a lactating friend for the day and brought back to me that night. I had to tell Shane to hurry up and get her out of the room because it was too painful to watch him slowly tuck her into her car seat and take his time walking her out.

The tests came back confirming postpartum pulmonary edema (fluid in/around the heart and lungs). The records state the OB wanted to call it cardiomyopathy (a broad term for a heart not working effectively) but the cardiologist rejected this diagnosis in favor of pulmonary edema caused by volume overload. That means my body was given too much fluid (for the epidural and then the C-section) and I needed Lasix to push it in the right direction which I received over a couple day’s stay in the hospital. My best friends came to hang out with me and because we were not on the OB floor, we had a LOT of attention from staff. Well, Audrey had a lot of attention anyway-everyone wanted to see the baby so they’d find a reason to come check on me even if they weren’t assigned to me.

I went home fifteen pounds lighter than going in but my blood pressure stayed elevated for a few weeks. I had to use medication for a while until everything normalized.

This birth story is hard. It’s been twelve years and I have always wondered if the epidural caused her distress. My memory conflicts with my journal in the status of her cord. I thought it was pulled tight and probably the culprit but my journal says otherwise. As I see the information about the decelerations and wonder if she’d descended so fast and we didn’t even get her out for half an hour, was I close enough to just push? I know providers vary greatly in their comfort level with a few decelerations, especially if they go back to baseline fast. I hate that I may have had unnecessary surgery. But I’ll never know (unless I ask for more records but these have discrepancies throughout so will the labor flow really tell me what I want to know?). Some day I’ll have to find a peace about that. I can promise you my husband has never given it a second thought-why can’t we be more like that?

Just in case you wondered, we knew that we were done after this adventure and our good friend Dr. Alling sealed the deal weeks after Audrey’s birth.