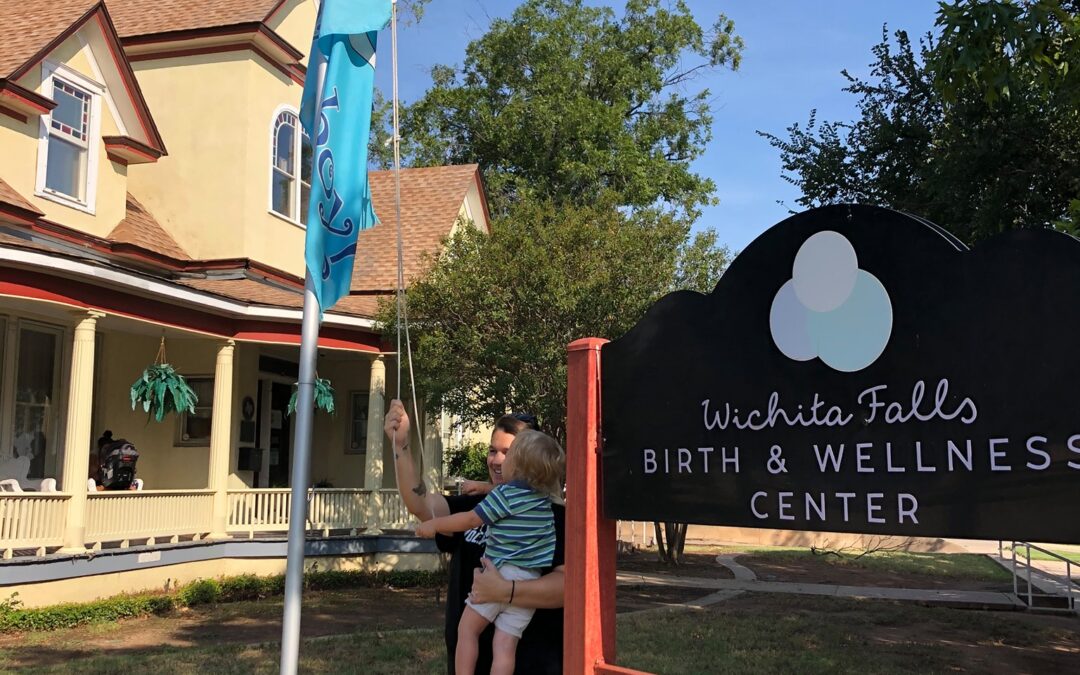 \While I was pregnant with my first, a friend from college recommended chiropractic care. I googled prenatal chiropractic care and found Dr. Guidry (what a blessing this was). During my first appointment, she mentioned the birth center. I was midway through my first ever pregnancy and had done no research on natural birth inside/outside of the hospital vs medicated in the hospital. Everyone in my family decided to receive an epidural and told me how much they recommended/encouraged me to do the same. My mind was made up before I even knew it was. So of course my reaction to her suggestion of the birth center was intrigued, but in my mind it was very far fetched.

My first birth was…hard. My birth planning and the actual event were very similar– totally manipulated by someone else. This wasn’t the only reason I revisited the idea of the birth center, but it was definitely the foundation of that decision. It took me researching and reading other birth stories to know that a lot of what happening during my birth wasn’t necessary. I wanted to be in as much control as possible. I wanted my VBAC. The birth center was my best chance at this. It took me until right around 24 weeks in to my second pregnancy to finally cut ties with my doctor and make the plunge, and it was the best decision I ever made.

Oh man- what a loaded question. I guess I should start by saying that a lot of concerns I thought I had, were not my own. Until I went and visited with Lenora and Wendy, I didn’t know that the concerns I had were in fact just fear instilled worries. For example, just about everyone in my family (full of doctors) were worried I would rupture, because it’s so common- right? Wendy enlightened me a little bit, and the chance is less than 1%. Some of my concerns were what labor would truly feel like when it hit. I never felt a contraction that just came out of the blue with Pitocin to help it along. Could I handle those contractions? Was I capable? But lets get real… what I found myself thinking about more than anything was what I was going to wear home from the birth center and what in the heck I was going to cook/freeze to eat after I gave birth!

Knowledge is power. It’s my favorite saying. I would not have had the power to overcome all of the fear that was put in my head if it weren’t for visiting and speaking with Lenora and Wendy. It took a few visits, but before long I found myself writing a letter to my family on why they couldn’t come to my birth. I needed to believe I could do it and I needed everyone in that house the moment this baby decided he wanted to come to believe it as well. I couldn’t have mustered up that courage without Wendy and Lenora and their knowledge. The put me at peace and they put my worries to rest. I was nervous of course, but confident that my body was made to do this and I needed to trust it.

At first my wife thought my pregnancy hormones were making me go crazy. She was just like my family and all of the outsiders looking in. She was scared. I came home from work one day and told her I wanted to go visit the birth center again, so she looked at me and sighed. She asked when the appointment was because she knows me so well. She knew that if I was thinking about it, the appointment was already set and that was that. After the first visit, she was inspired. She told me “if anyone can do it, you can do it”. Her encouragement helped me as well. The friends that I shared my plans with were very supportive. There were 3 of them. Two of them lived out of town and actually planned on being at my birth- but they didn’t make it. I needed hands to hold before they could be there, so my other friend and sister in law were there beside my wife. I’m glad there were 3 of them, because they had to rotate in and out on the hand holding through contractions. I am surprised I didn’t break their fingers.

Oh the question I asked myself over and over…. would I know I was in actual labor or would I bother Wendy at 1am over a few Braxton Hicks? They say “when you know, you know”, and holy heck is it the truth! I had a chiropractic appointment with Dr. Guidry at 1pm, and on the way home I stopped by the birth center to see Lenora. On my way out to the car after seeing Lenora I had a contraction so hard it made me almost fall to the ground. We drove home… to grab our bags.

Within a hour of my chiropractic appointment and 10 min of seeing Lenora, I was in full blown labor with contractions every 3-4 min. No more smiles or jokes. Nothing but breathing and finger squeezing!

My birth was hard. I used water. I moved around in just about every position I ever thought of, and some. My baby was OP, so I was working my tail off to get him to turn. I didn’t have a doula, but I had an amazing team. During contractions I would hum and make low noises. I had to have someone’s hand in mine during each and every contraction (Sorry Margaret, Amy, and Alex ). I worked hard and long but despite all of the tricks, I couldn’t get that darn baby out! We made the decision after 12 hours and lots of pushing to head up to the hospital and I gave birth to my Lennon at 4:39am via C-section.

All of the love that I felt. Had I tried for my VBAC in a hospital and found myself unsuccessful, I could almost guarantee I would have been in a lot worse shape (mentally) than I was. Of course I was disappointed and sad- who wouldn’t be? But looking back I have zero regrets. The women in that birth center are nothing short of amazing.

Physically, doing a full blown lunge during a contraction. I had my foot up on the stool and once that contraction hit, I had to lunge deep down. Either that or laying flat on my back on the bed with my feet dangling nearly touching the floor during a few contractions. When I say I tried it all, I tried it all. Mentally, saying “I can’t do this anymore” and knowing it was the truth that particular time around. For the record, I said it about 15 times throughout my labor but I kept going for hours and hours. It was the last time I said it that I knew it was really time to throw in the towel and make the best decision for myself and for my baby. That was a tough one.

It was one of the main things I was looking forward to! Being at home with my baby hours later- whew that would have been amazing!

Given our circumstances, she did not. I was able to go to Lenora for my post natal care, though! She checked my incision around 2 weeks postpartum and I was able to raise the flag with my family. Having that moment meant a lot to me during my fragile mental state.

The whole time I labored I had thunderstorm sounds playing on my Alexa. Sometime around 11pm (my labor started at 2pm, so I was well in to labor), we were able to turn the Alexa off and listen to a real thunderstorm. It was amazing. One of the names we had picked out for our son was Raiden which means thunder and lightning. Had he been born during the storm, he would have been named that. Other than that, I really just wanted to encourage any mom out there that has even the slighted bit of hope for a VBAC to visit the birth center. It may not have worked out for me, but it was still one of the most empowering and exhilarating days of my life. I made friends for life and I learned so much. You have the power to take control of your birth and make decisions for yourself.

If you have no family backing you, you can still give birth and this center and feel more love and support than I can describe with words.