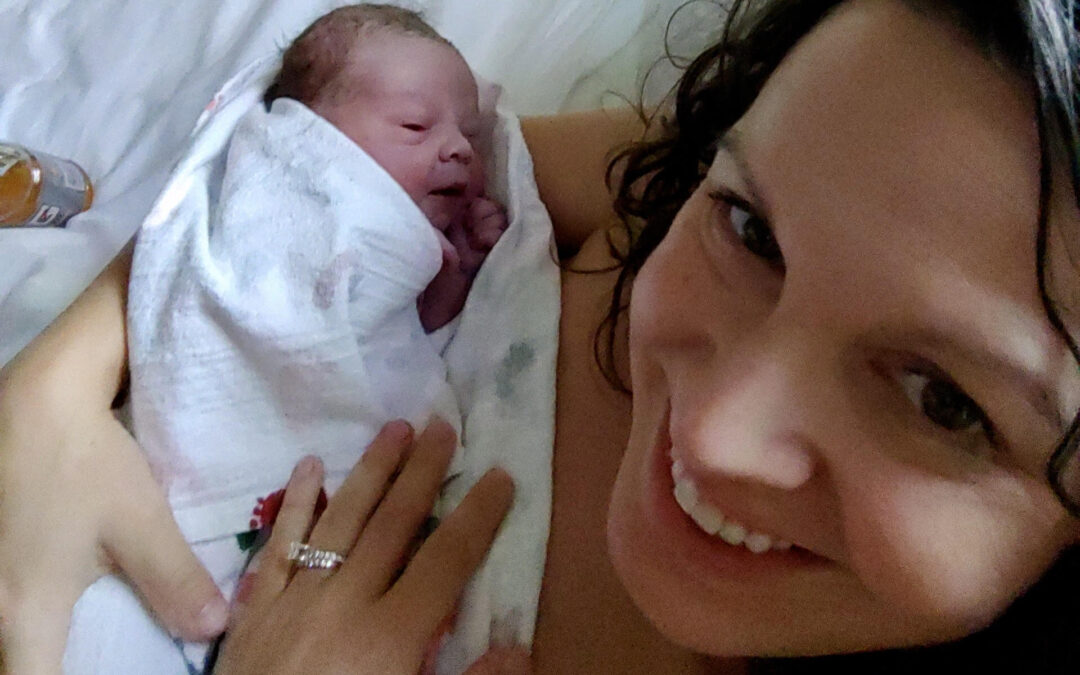 I heard about a birth center being in the works while I was taking Bradley Birth classes during my first pregnancy, and it opened about a year after I had my second child. I attended the first Tribe Talk, where I met some of the staff, heard their stories, and toured the center. My birth experiences up to that point were a premature birth and a breech birth, and I didn’t get to see or hold either of them after they were born. Then I had miscarriages back to back and I knew I needed a different kind of care and atmosphere – no more waiting rooms or being considered high risk.

Our concerns were about what kind of care they could provide our baby after birth if there was a problem. In our experiences, both of our children needed to go to the NICU after birth. We understood those were both rare occurrences, but that was all we knew. My other big concern was what if I had to go to the hospital and what doctor was I going to be stuck with?

We were put at ease about our baby’s care, because we knew that everyone at the birth center was trained and prepared for emergencies. We also knew that the hospital was just a few blocks away if something did happen. I was excited to be somewhere that would allow me to labor without the interference of forms to fill out, bloodwork, the tiny cup they want you to pee in while your are in active labor, or a room full of people I didn’t know. I didn’t get over my hospital concern until I passed the date of being considered premature.

Once I found out I was pregnant, my husband and I visited the birth center together for a Meet the Midwife event. He surprised me by immediately being on board after hearing them talk. I had decided before we even got pregnant that I wanted to go to the birth center if they would accept me as a patient. My husband was open to it because he felt that we needed to be somewhere that made me comfortable.

I had an appointment with Lenora that morning and I told her that I was feeling crampy. After being checked, I was dilated to almost a 3 and 50% effaced. I told Lenora that I was in the same position the day I had my daughter, and I went into labor that night and had a baby 2 hours later. About 2pm, I was still questioning whether or not I was in labor because I was having non-stop cramping and low back pain. I got in the bath to change things up and determine if I was having regular contractions. Lenora checked in on me about that time to see how I was feeling. I realized I was having contractions about 10 minutes apart.

Within a few hours, my contractions were getting stronger and occasionally a little closer together. I needed counter-pressure to get through them. I had a few contractions 5 minutes apart, and knowing how quickly my last baby was born, we wanted to head that way. When I stood up to walk, I knew it was time to go. We messaged Lenora to let her know we were headed that way and thankfully she beat us there.

Fast! We arrived at the birth center, I walked up the stairs to the bottom of the bed where my water broke, and moments later we had a baby while standing up at the side of the bed.

Catching my baby! It was such a blessing to be the first to look into her eyes, hold her close, and form an incredible bond. It was a dream come true. The other thing I would say was an amazing bonus was the herbal bath.

The car ride to the birth center. I transitioned on our way to the birth center and I was trying to figure our where my husband was going to pull over on the side of Kell for me to have a baby. I didn’t think we were going to make it. We were behind a police car for part of the drive and I remember thinking that if he could see me in his rear-view mirror, he was probably wondering what was going on with that woman. (My husband said he turned on the emergency lights temporarily thinking, this guy could turn on his lights and get us there faster, but he thought twice and didn’t want to be led to the hospital.)

It was so nice to be able to go home and settle in with a new baby in your own space. It was a different experience to not have someone checking on you or the baby constantly. I felt like this was the way birth was supposed to be. It doesn’t have to be some big medical event with a long hospital stay and someone constantly monitoring you as if something was wrong.

Yes. It was great to see her. It felt more like a casual conversation, rather than a check-up. It was special to have the person who helped you through the birth of your child also be the one who checks in on both of you a day or so later. You build a relationship with Lenora during your pregnancy and you continue your friendship and trust afterwards as well.

When we arrived at the birth center I remember Lenora seeing me and saying that it looked like things were progressing quickly. When my water broke at the foot of the bed, she asked me if I wanted to have my baby standing up. I said no, but all I was able to do was scoot a few steps over to the side of the bed. I saw the steps to get on the bed, and thought how am I going to do that. Next thing I know, we had a baby! It was record time inside the birth center and she was born on her due date!